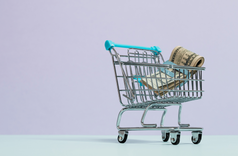 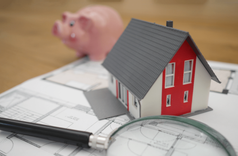 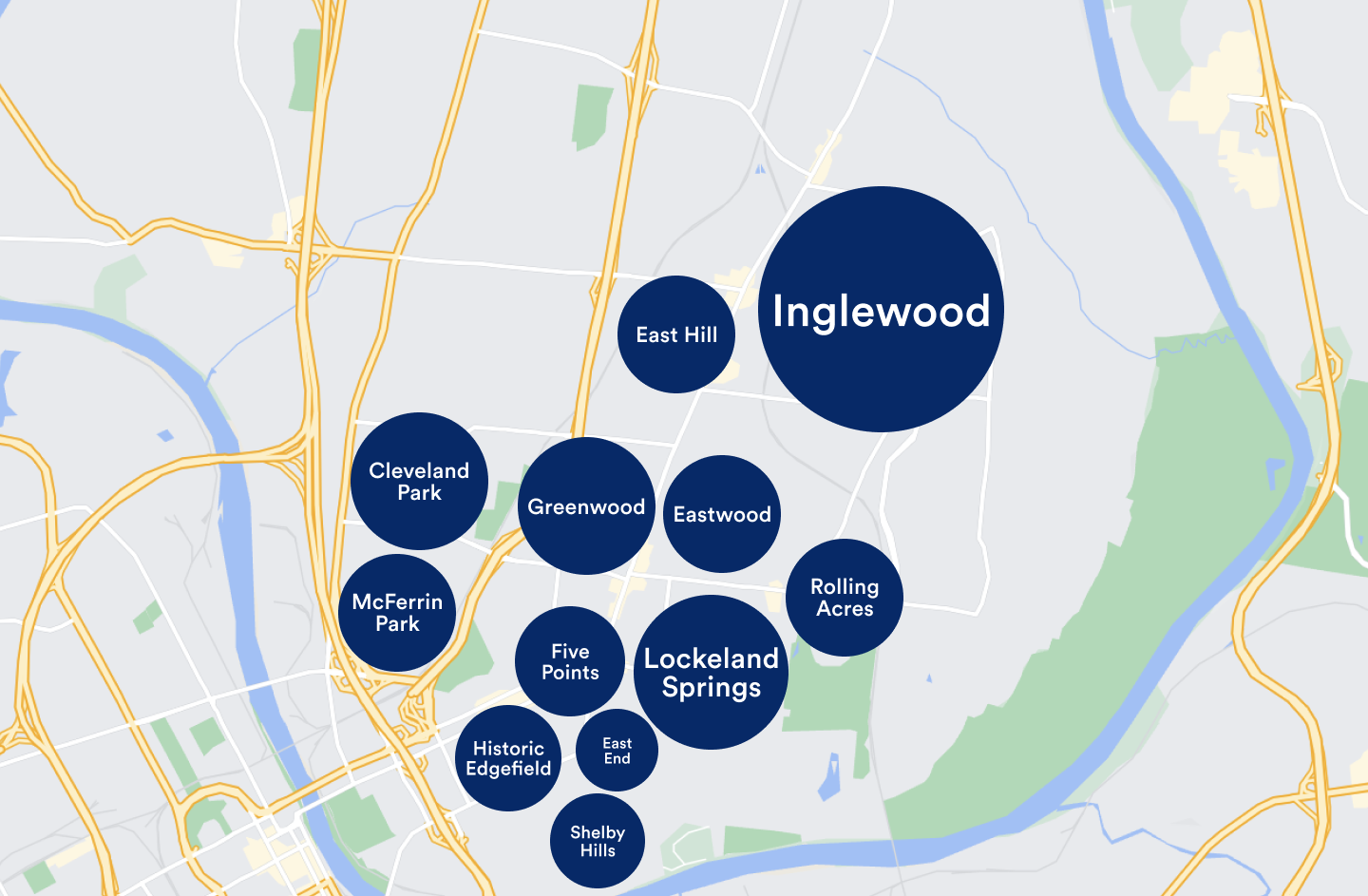 One of the largest and most sought-after locations in Music City is East Nashville. It stretches nearly 21 miles in size and includes several smaller neighborhoods. Over the years, much of the east side transformed into a vibrant and trendy hub for artists and musicians. East Nashville is continuously evolving, and many of the neighborhoods have now acquired their own individual charm.

We’ve compiled a complete guide to all of the neighborhoods located in East Nashville. We’re exploring what sets each area apart and the community as a whole. Our list breaks down what you can expect to see as well as fun things to do in the different neighborhoods of East Nashville. Whether you’re a youthful creative or looking to raise a family, East Nashville has the perfect home for you.

Who Is East Nashville A Good Fit For?

The east side is a cultural melting pot. While many of the neighborhoods in East Nashville are residential, more areas are welcoming new, commercial, and mixed-use developments. Neighborhoods like Five Points and Eastwood are now home to some of Nashville’s most renowned restaurants and unique shops. With the transition, we’re seeing a younger, more hip crowd heading into the redeveloped areas.

PRO TIP: See the coolest neighborhoods in Nashville for singles and young professionals

That’s not to say that East Nashville isn’t welcoming of families. Many of the neighborhoods in East Nashville have an abundance of green space and parks for kids to play. Both Lockeland Springs and Rolling Acres are fit for families who desire to be close to greenery. Another neighborhood suitable for families is Historic Edgefield. In this primarily residential area, you’ll find an array of beautiful Victorian-style homes and luxurious estates.

PRO TIP: See the best neighborhoods in Nashville for families

Are The Neighborhoods In East Nashville Affordable?

The short answer - yes and no. Finding affordable housing in East Nashville is really all about where you look. If you’re searching for a home in the up-and-coming neighborhoods, like Cleveland Park or McFerrin Park, there’s a good chance of finding a great deal. However, in the more developed and popular neighborhoods finding a low-priced home isn’t as common - although still possible!

PRO TIP: Check out the most affordable neighborhoods in Nashville

Our answer to this is similar to the topic of affordability - it all depends on where you’re at. As with any neighborhood, you’ll find parts that are safe and some areas that aren’t as safe. Roughly 10 years ago East Nashville was a completely different place than what it is today, and the area was far from being considered safe. Now, many of the neighborhoods in East Nashville have made significant improvements when it comes to safety. You can view our full post on the safety of East Nashville here.

Now let’s get into the fun part - the guide to all of the neighborhoods in East Nashville:

The largest neighborhood in East Nashville is Inglewood. You’ll find this area located in the northeast region, nestled between the Cumberland River and Gallatin Pike. Many families are drawn to the area for its residential, quiet vibe. You’ll also see a lot of greenery in this neighborhood. You can even head over to the nearby Shelby Bottoms Greenway to explore the 960-acres of beautiful nature.

The neighborhood is filled with a variety of home styles, available at various price points. The demand for living in Inglewood is on the rise, and purchasing real estate in this area has a reputation for being a great investment.

Inglewood is also a hub for delicious eats. Stop by Mitchell Delicatessen for lunch and fuel up on one of their delicious sandwiches. Lou is another local favorite in the neighborhood. They offer a spectacular wine selection and a tasty weekend brunch menu. Come nightfall, you’ll want to head over to Inglewood Lounge. It’s a stellar neighborhood cocktail bar serving classic drinks with a modern twist.

PRO TIP: Check out homes for sale in Inglewood

Lockeland Springs is another spot in East Nashville ideal for raising a family. It sits alongside the Shelby Golf Course and is also close to Shelby Park. The neighborhood has a charming, historic feel to it. Many of the home styles range from Victorian, Craftsman, Cottages, and Turn-of-the-Century. The price points are a bit higher than some of the other neighborhoods in East Nashville, but the area’s character is sure to win you over.

The neighborhood itself is very walkable and filled with awesome murals. You’ll find so many great restaurants in Lockeland Springs, including Five Daughters Bakery, Lockeland Table, Dino’s, Bar 308, and Lipstick Lounge. For even more variety, you can walk right over to the neighboring area of Five Points.

Five Points is known as the commercial epicenter of East Nashville. This area isn’t technically a neighborhood, but rather an intersection of 5-points, hence the name. In 1998, a devastating tornado destroyed many of the prior residential homes. Since then, the area has undergone a massive amount of redevelopment and shifted to be predominantly commercial.

In the neighborhood of Five Points, you’ll find some of the best restaurants in all of Music City. Places like Five Points Pizza, I Dream of Weenie, Treehouse, and Rosemary are all local favorites that helped define East Nashville’s culinary scene. The neighborhood bar scene is pretty epic too!

Unfortunately, living in Five Points isn’t really an option anymore due to all the commercial real estate. But, you can check out Historic Edgefield, East End, or Lockeland Springs to stay close by.

Moving on to East End, one of the smallest neighborhoods in all of East Nashville. While it may be tiny, the demand for living here is high. The price of real estate can run pretty steep, but just finding a property on the market is rare. The style of homes found mainly in East End are historic remodels.

Although East End doesn’t have too many restaurants in its own small neighborhood, it’s only a quick walk to Five Points - a culinary haven. You’ll find the homes in the area are steps away from popular spots like BoomBozz, Shep’s Delicatessen, and 3 Crow Bar.

East Hill, or as some call it Keeling Avenue, sits in the direct center of East Nashville. Its convenient location provides easy access to Ellington Parkway. Homes in the area include different Cottages, Tudors, and new construction. The area is also growing with its commercial property as well.

Two of the classic neighborhood spots include Las Maracas and The Cobra. However, several newer additions like Fox Bar and Walden add to East Hill’s overall appeal. In the next few years, we definitely expect to see more cool restaurants and bars like these opening up in the neighborhood.

Bordered between Gallatin Avenue and Porter Road is the neighborhood of Eastwood. This spot is a local favorite among many Nashvillians. Here you’ll find several different home styles, ranging from Tudors, Victorian, and different styles of Cottages. You can also find pretty good deals on homes in the area too.

The neighborhood has an abundance of local restaurants, bars, and shops. An East Nashville favorite is Cafe Roze, but you’ll also find The Nashville Biscuit House, Pepperfire, and Vinyl Tap all in the area.

PRO TIP: Check out homes for sale in Eastwood

On the opposite side of Gallatin Avenue, you’ll find Greenwood. This is another walkable neighborhood in East Nashville that has so much to offer. You can find charming bungalows and victorian-style cottages throughout Greenwood. However, some of the homes can cost a pretty penny compared to other neighborhoods in East Nashville.

Greenwood is best known for the array of hidden restaurant gems, like Mas Tacos. You’ll also find The Pharmacy and Peninsula here too. The neighborhood is very convenient for the local residents, as you’ll find several grocery stores all within walking distance.

Cleveland Park is one of East Nashville’s most up-and-coming neighborhoods. The area has seen a recent influx in growth, and many home buyers are looking to capitalize on the current low-priced homes. You’ll find a variety of new construction and mid-century bungalow homes throughout the neighborhood.

Several new businesses are emerging as the area continues to transform and improve its crime. Lil’ Cee’s Restaurant is a favorite in Cleveland Park, along with Shugga Hi Bakery and Nashville Pizza & Pasta.

Directly south of Cleveland Park is the neighborhood of McFerrin Park. It’s another rising spot in East Nashville, making significant strides in its development. The location is very appealing as it’s one of the closest neighborhoods in East Nashville to Downtown. You can expect to see many different styles of homes, including new builds, Victorian, Tudor, and Craftsman.

Two of East Nashville’s most notable restaurants can be found in McFerrin Park; Folk and Red Headed Stranger. The neighborhood also recently welcomed the addition of Wilburn Street Tavern. It’s a dive bar and eatery operated by the owner of Mas Tacos - so you know it’s good! We definitely expect to see more new spots opening up here soon.

The neighborhood of Historic Edgefield helped put East Nashville on the map. Seeing that it’s the first established residential spot on the east side, you’ll find several grand Victorian-style homes, along with Antebellum Mansions. The home prices are higher than many of the surrounding neighborhoods in East Nashville, but the quaint charm is one-of-a-kind.

Although the neighborhood is predominantly residential, it is still home to some of the best restaurants and bars in town. In Historic Edgefield, you’ll find Butcher & Bee, Edley’s Bar-B-Que, The Crying Wolf, Attaboy, and many others! The area is also home to The Turnip Truck and the East Nashville Farmers Market.

An East Nashville neighborhood favorite for families is Rolling Acres. The area offers scenic views of Shelby Golf Course and is a short walk to Shelby Park. You can find many Ranch style homes, along with a variety of new construction. Home prices are also fairly affordable compared to the surrounding areas.

This spot has an overall residential vibe, but you can find a handful of shops located on Porter Road. The neighboring area of Lockeland Springs offers a great selection of restaurants often enjoyed by those living in Rolling Acres.

Shelby Hills is another emerging neighborhood located in East Nashville that is still very much in its transitional stage. You can find a blend of both new and older homes in the area for a reasonable price. The neighborhood also backs up to Shelby Bottoms Greenway, providing easy access to pathways and nature.

You’ll find Shelby Hills is close to all of the shops located on Fatherhood, along with a handful of nearby restaurants. You’re also within walking distance to Five Points and East End for even more delicious eats. As the area continues to grow, we expect to see more restaurants making their way into Shelby Hills.